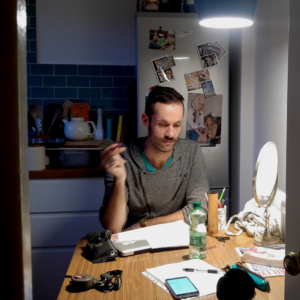 Oliver has made several short films over the last few years. His last short, ‘Away With Me’, was released by Peccadillo Pictures on Boys On Film 16. It was included at London BFI Flare, In & Out Nice and Cannes, Inside Out Toronto and the Rio Festival of Gender and Sexuality.

He has made online video content for brands including ASOS, Gaydar and innocent drinks. He currently works as a video editor for VICE. He has worked in film and TV, providing script and book reports for companies such as Working Title, BBC Drama and Clerkenwell Films. Watch more of his work over on Vimeo.

“One particularly unforgettable time was at University. Having been in halls for the first year, four friends and I moved into a house for our second. The housemate who won the largest room arrived several days after the rest of us - so that gave us plenty of time to swap or move into his room all the furniture we didn't want. However, it was a small and narrow house. Moving a wardrobe downstairs from my room to his, it got stuck halfway down the staircase. Two of us were stuck above it - two stuck below it. The lower pair had to go for help to borrow tools to disassemble the wardrobe, get it down the stairs, then put it back together again. I don't think he even noticed the large, slightly wonky wardrobe in his room.”