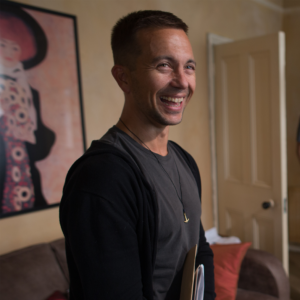 Matthew’s writing for theatre has been produced across the UK and Europe, as well as in America, Australia and South Africa. He is currently writing a feature length screenplay for Dan Films.

His most recent play, The Man Jesus, premiered at the Lyric Theatre, Belfast, and was nominated for an Irish Times Best New Play award. It has since toured the UK and been translated into Afrikaans (Klein Karoo Nationale Kunstefees, South Africa) and Italian. A new English language production recently opened at the Market Theatre, Johannesburg.

He has written two plays for the radio: Kingdom Of Cloud and Phumzile. Both have been broadcast on BBC Radio 4.

“I’m not sure I believe in ghosts, but I used to live in a mansion block in Maida Vale. Over the years, flatmates came and went. But everyone who stayed in one particular room all had the same experience of sensing – sometimes seeing – a ‘black blob’. I would never tell a new flatmate about the previous occupants of the room’s experiences, but inevitably they’d report their encounter with the black blob to me and I’d confess to the spectral history. Whatever or whoever the black blob was, I guess they just never wanted to pack up and move on.”