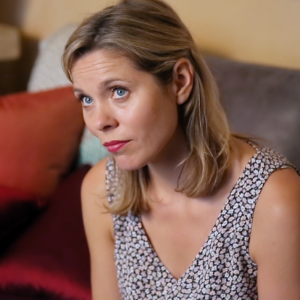 Marnie Baxter graduated from the Royal Conservatoire, Scotland, in 1999 with a BA in Acting.

Marnie's recent film credits include playing the lead in ‘The Tormented' for Blue Monkey Films, which is due for release in 2018, and the BAFTA-awarded 'Running in Traffic' for Dabhand Films. Recent television work includes ‘Shetland’ (Series 2 and 3), ‘Eastenders’ and ‘Doctors’ for the BBC, and comedy pilot ’Sunset Dreams’ for Tremendous Pictures.

Marnie has also worked extensively in theatres all over the U.K. She played Russian journalist Anna Politkovskaya in the critically acclaimed ‘Anna’, which had a sell-out run at the Edinburgh Festival. She travelled to Palestine with the same company to devise ’Al Nakba’, which depicted a family’s endurance of the prolonged bombings in Gaza, and toured ‘The Flood’, a two-hander about the effects of war on a young relationship.

Marnie has also produced several theatre projects: ‘Lunch’ by Steven Berkoff at The Kings Head, ‘High Brave Boy’ by Rod Wooden for the Gilded Balloon and ‘The Time Step’ by Matthew Hurt, directed by Linda Marlowe and Josie Lawrence. She is currently in pre-production on her first short film, due to shoot in April 2018.

“One year when I was at college, my flatmate and I decided that before packing up our flat in readiness for our 9am checkout the following morning, we would go for a quick drink. One thing turned into another and somehow instead of heading home to pack up the flat, we brought quite a lot of the pub back to carry on drinking after closing. I was woken the following morning, slightly dry-mouthed and feeling a little nauseous, to the doorbell and a shriek from the other room, “The estate agent is here!” I jumped out of bed, tripped over someone in a sleeping bag on my floor and quickly hatched a plan - whilst my flat mate threw people out, I would throw things out of the window. Genius. So whilst the estate agent eagerly made her way up the stairs to our flat, bleary-eyed people in various forms of undress and confusion fell down the stairs towards her. And I simply threw everything I could see out the window. Mugs, t-shirts, towels, ashtrays. All landed on the garden below. I even opened one window and literally swept the entire contents of the windowsill out with my elbow. Needless to say none of it went down very well when the lady finally made it to our door, and we were charged extra for our sins. I also had to spend a while in the garden looking for my passport, which, it turns out was placed in readiness on the windowsill.”