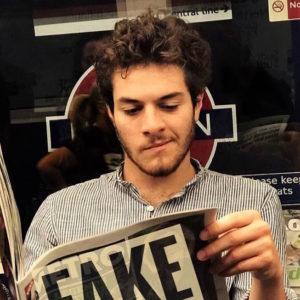 Originally from Rome, Jacopo studied Management & Marketing as an undergraduate at Cass Business School, London. After three years in the UK he moved to Milan to work for the marketing and creative team for events in Condé Nast, specifically for Vogue and GQ magazines. He subsequently decided to pursue his long-held ambition of working in the film industry and started at Leone Film Group in Rome. In September, he returned to London for an MA in film business and production at the London Film School.

His passion for creative writing as well as for film and theatre has led him to co-author the theater piece ‘Tipi’ and translate Matthew Hurt's ‘The Man Jesus’ from English to Italian (an ongoing project that will be staged in 2018).

He has been producing videos for the fashion brand Animapop; with the fashion film ‘Choose Your Side’ entering the official selections of the Seattle and Brussels Fashion Film Festivals. Currently he is producing a short film, ‘Dumka’, based on Tchaikovsky’s composition by the same name.

“In hindsight, red flags were flying everywhere but a mixture between the search for a roof and being plain and simple naïve made me blind enough to miss them. I had only spoken to the landlord, Argo over the phone and when we finally met he casually mentioned that Argo wasn’t really his name but that of his dog; red flag one. Considering my fascination for Homer’s Odyssey, this red flag particularly burnt. I was greeted by a man completely covered in tattoos from neck to fingertips escorted by two sad looking pitbulls. Not menacing, just plain sad. Tattoos weren’t absolutely an issue as I have them myself and all in all the guy seemed easygoing. So I bring my suitcases up to the fifth floor, after roughly 93 steps (the elevator was out of service) I step inside and am greeted by sucker punching smell of weed and ammonia. The guy leaves for work claiming that a friend named “Mark would come over to pick up something he forgot in his room”. I don’t see it as a major issue as Mark is surely going to ring the bell and I’ll know when he’s coming upstairs. Mark has the keys to the flat; red flag. I wait roughly ten minutes after the guy has left the flat to enter 007 mode. Around the house I find numerous needles, also in the kitchen…don’t think he used them for stuffings. I enter his room carefully inspecting the area finding satanic books, a flamethrower, a notebook with carefully written names and numbers, a miniature statue of Cthulhu, three large jars of weed, hash and what looked like heroin on a burnt spoon and finally his passport. Google his name and articles on various big-name papers show up. Criminal record for drunk driving and drug trade. Sadly I didn’t have time to say goodbye in the morning.”